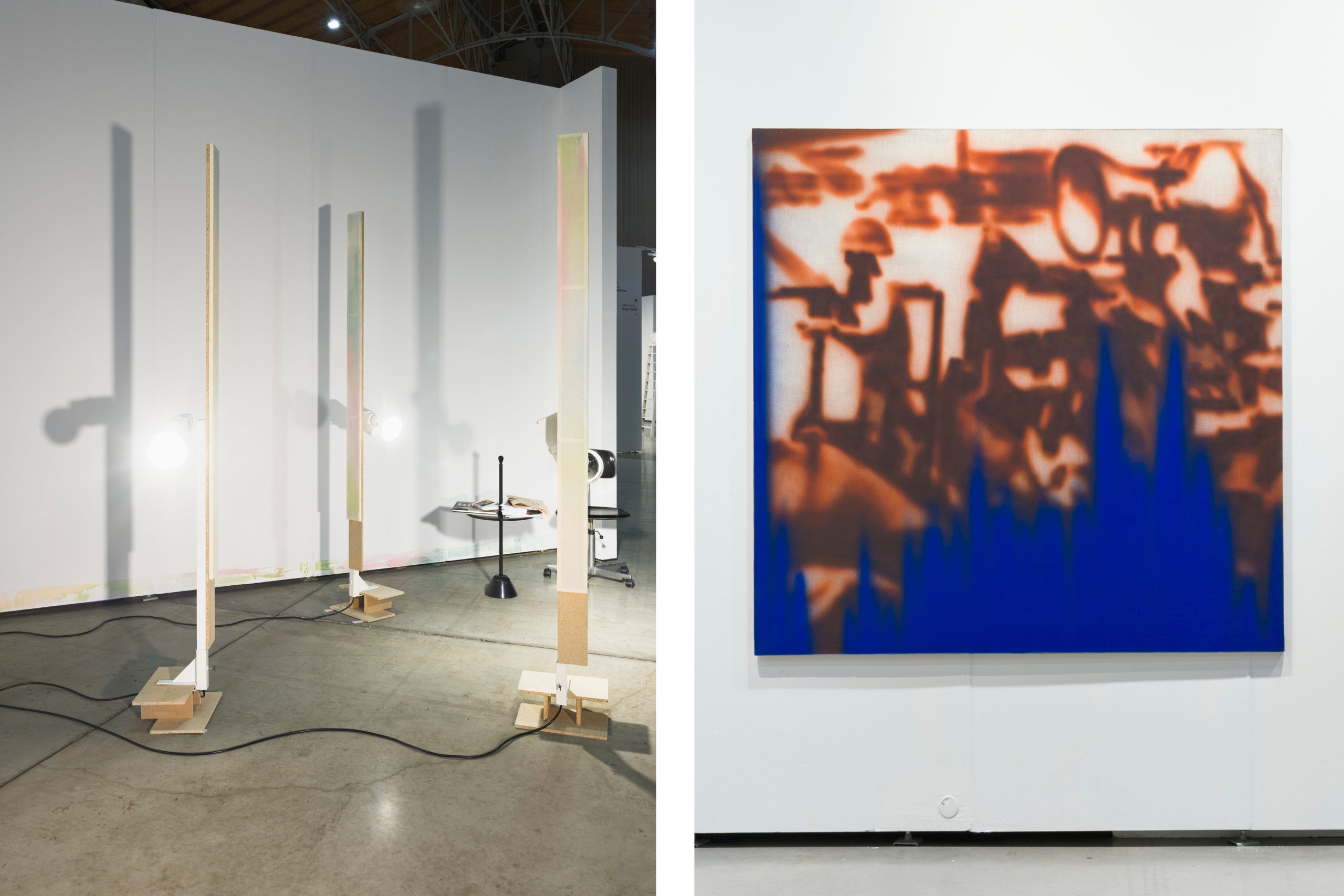 In semi-automatic processes, the artist Axel Koschier takes a step back as author. He splits his role into the
facilitator on the one hand and the executing worker on the other. In the interweaving of the various processual logics and logistics traditionally assigned to different artistic dispositifs, the coordinates shift. In this way, he opens up space for the materials and tools to react spontaneously with each other. Between “what you see is what you see” and hermetic technical
and aesthetic inside jokes, Koschier regularly makes a game of provocatively challenging the expectations that participants in the art world have of the components used in artistic production. For Spark Art Fair’s section The Fourth Wall, curated by Fiona Liewehr, Axel Koschier is developing a site-specific installation that takes cues from the fair’s architecture. Integrating the sterile standardization of the art fair’s presentation modes with his own subjective artistic decisions, this stage-like intervention in the conventional art fair booth will set in motion an process of entanglement of different parameters at play in the conception, distribution and interpretation of any work of art.

Created in 1972–73 during a British Council scholarship at the Slade School in London, the paintings of the series “Kalte Strahlung” (Cold Radiation), which WONNERTH DEJACO will present at SPARK ART FAIR VIENNA 2022, belong to Robert Lettner’s overarching series “Anarchy”. In this series, Lettner primarily used fragments of pictorial motifs taken from print media. Filmic and photographic reproduction techniques, the “sensuality” of political mass printed matter, the image production of the Paris May 1968 and the student movement were among the materials that Robert Lettner used at the end of the 1960s and beginning of the 1970s, in a kind of “dialectical reproduction process” to create an idea of realistic painting adapted to the circumstances of the time.
Another programmatic aspect was the use of modern industrial painting tools (spraying techniques / “airbrush”), which allowed the canvas paintings to be given the optical effects of the printing technique in additive color mixtures and thus the sensual impression of an environment characterized by commodity aesthetics. In the combination of photographic imaging techniques and the expression of hand painting, Lettner saw a possibility to convey reality upholding the tension of its contradictions emotionality / rationality, subjectivity / objectivity, individual / society. In his contribution to the catalog of the 1990 exhibition “Kalte Strahlung” by Robert Lettner and Adam Jankowski at the Museum Moderner Kunst Vienna, Werner Hofmann, its founding director, points to the “segmented realities” we encounter everywhere and speaks of a “realism that confronts the refractions into which our perceptual grids break down.”
From Harald Krämer, Robert Lettner. Das Spiel vom Kommen und Gehen, Klagenfurt 2018, pp. 14–17, abridged and summarized.

Robert Lettner was born in Elne, France, in 1943 and raised in the Gurs internment camp by an Austrian father who had fought against fascism in Spain and a mother who had fled Nazi Germany as a critical journalist from Cologne. He later grew up in Paris and Salzburg and attended the Academy of Fine Arts in Vienna. Lettner’s recalcitrant and critical nature would go on to be a constant in both his life and his art.
Lettner had his first first exhibitions in the late 1960s in the legendary Griechenbeisl gallery, the focal point of the young Austrian scene. A close friend of Oswald Oberhuber’s, Lettner presented his paintings in no less than four solo shows during the 1970s at Otto Mauer’s Galerie Nächst St. Stephan. Institutional solo exhibitions at the Museum of the 20th Century (mumok), at Hamburger Kunsthalle and Vienna Secession, among others, followed in the 1980s and 1990s. He became a lecturer at the University of Applied Arts where he presided the department for Graphics and Reproduction Techniques from 1985 until 2008. Lettner’s work has most recently been shown at Albertina Modern (The Beginning…, 2020) and Hamburger Kunsthalle (Früher war schon immer jetzt. Malerei seit 1947 neu präsentiert, 2020/21) and has been acquired by or bestowed to collections as the Österreichische Galerie Belvedere, mumok – Museum Moderner Kunst Stiftung Ludwig Wien and Albertina Wien.